When I’m looking for a good boondocking campsite, I try to research beforehand the area where I’m heading. For boondocking in the National Forest, using a Motor Vehicle Use Map (MVUM) is an important tool that shows where you’re allowed to camp (or not).

Now these maps don’t tell you which spots are great, just which are legal. Usually I can find other information sources that point out attractive spots, but sometimes they come up dry. So what’s a person to do, but start scouting out forest roads?

Let’s just say sometimes this works out better than others! 😉 This day ended up at a nice boondocking campsite on FR712, but it took awhile…

I am so grateful for all of the excellent National Forest lands that we have in the US. These are a prime source of fabulous free campsites, and I’ve enjoyed many nights camping in these areas.

If you want to free camp in a National Forest, they publish what they call Motor Vehicle Use Maps for different forests. Many of these MVUMs are available for download online, though not all of them are online yet. Just search for the National Forest you’re interested in.

These maps show you all of the roads (including some gnarly dirt roads that would be the death of Zennie for sure!) that are open to motorized vehicles, and use a series of little dots along the roadways to show you where dispersed camping is allowed. If you’re going to be boondocking in a National Forest, a Motor Vehicle Use Map is a good thing to have.

Using a Motor Vehicle Use Map has its limits

Unfortunately, on its own, a MVUM isn’t really all that useful. Believe me, I speak from experience! 😉

If I had a 4-wheel drive high clearance vehicle, I’d feel pretty confident about taking off down most of these roads on the map. Even with that, however, there will be times you run into one that’s washed out or impassable, especially if conditions are muddy or snowy.

But with Zennie, my range of dirt roads is significantly more limited than if I was driving a Jeep or a Tacoma. With a low clearance, 2-wheel drive, big vehicle with a little engine, my ability to deal with forest roads is greatly reduced.

I can’t even make it on some roads that normal passenger cars can handle! Sometimes this is due to the oversize vehicle combined with a narrow road and tight corners. Other times it’s due to steep hills. In Colorado, Zennie came to an absolute halt on a 21% grade dirt road, and we couldn’t move forward at all. It’s a scary situation, and one I’m not keen to repeat! 😮

So I was up in northern New Mexico, looking for places to camp in the Carson National Forest, using the appropriate Motor Vehicle Use Map. I also had a USGS topo map of the area on my phone, so I could get some idea of the terrain, but that doesn’t tell you whether a road has huge ruts, soft sand, or requires climbing small boulders. So I still felt like I was going in blind!

“Discretion is the better part of valor.” I’m not sure who said this, but it sums up my philosophy when it comes to venturing down unknown roads! 🙂

I know I’m more cautious about this than other people would be. My ex would have gone full steam ahead through places that I’m not willing to go. But personally, I’d rather be overly conservative than have a problem in the middle of nowhere, especially when I’m out here by myself. Everyone has their own limit for the risks they are willing to take, and this is mine.

The spot where I ended up was on Forest Road 712. This one was a winner!

Google maps shows this as road #91, but on the USGS topo and the MVUM it’s shown as #712. The GPS coordinates should get you to the right place.

There were signs posted about watching for logging operations, which is probably why the road was in as good shape as it was. I only saw one logging truck go in and out during the time I was there, however, so it wasn’t any issue.

In late afternoon, the monsoon rain clouds started to build, and gave this spectacular display. I love those towering clouds! Everything else – trees, roads, mountains, problems… they’re all dwarfed by those giant puffy clouds. 🙂

There were a few people who drove by in trucks or ATVs during the afternoon, but I didn’t see anybody else camped anywhere nearby. At night, the traffic disappeared entirely, and it was a silent night.

All in all, this campsite was a success, but one that I had to work for!

Have you driven down dirt roads where you weren’t sure of the conditions, or if you’d be able to make it? Do you have any experiences or tips to share? Leave them in the Reply section below. Thanks!

Hi! I’m Deanna, creator of Uphill Zen. I’m currently yondering around North America with my 1986 Toyota motorhome, Zennie. What makes my heart sing is travel, adventure, and the awe-inspiring wonders of nature. Finding ways to share that joyous spirit is what this is all about.

Eeek! Zennie has a mouse! How do I get rid of it?

Zennie needs to chill! Painting the roof to keep it cool

Ouch! Getting hurt on the road

Discover the magic and mystery

This stunning new book takes you to the Yucatan Peninsula, an exotic and fascinating land.

Hundreds of vivid color photos bring the magic of the Yucatan to life, and adventurous souls will find all the “how to” details you need to make each experience your own.

How to use GPS to plan an overland trip

Zennie vs. The Rockies – Driving the Million Dollar Highway

Thanks for sharing! Comments are held for moderation, and manually approved before they appear. I try to answer all of them, but I'm often off grid, so it may take awhile! 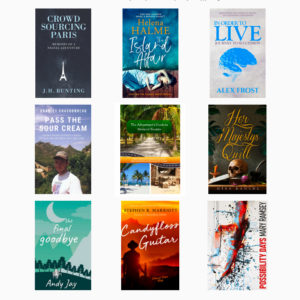 Tired of being cooped up?

Get FREE travel-inspired books, from me and 8 other authors.

During this crisis, we can’t be out there in real life, but at least we can read and dream.

This site uses cookies to give you the best experience.OK, got it!Find out more